The market is completely disconnected from reality. It is impossible to deny the profound impact that COVID-19 has had on businesses around the world, as well as our personal lives. 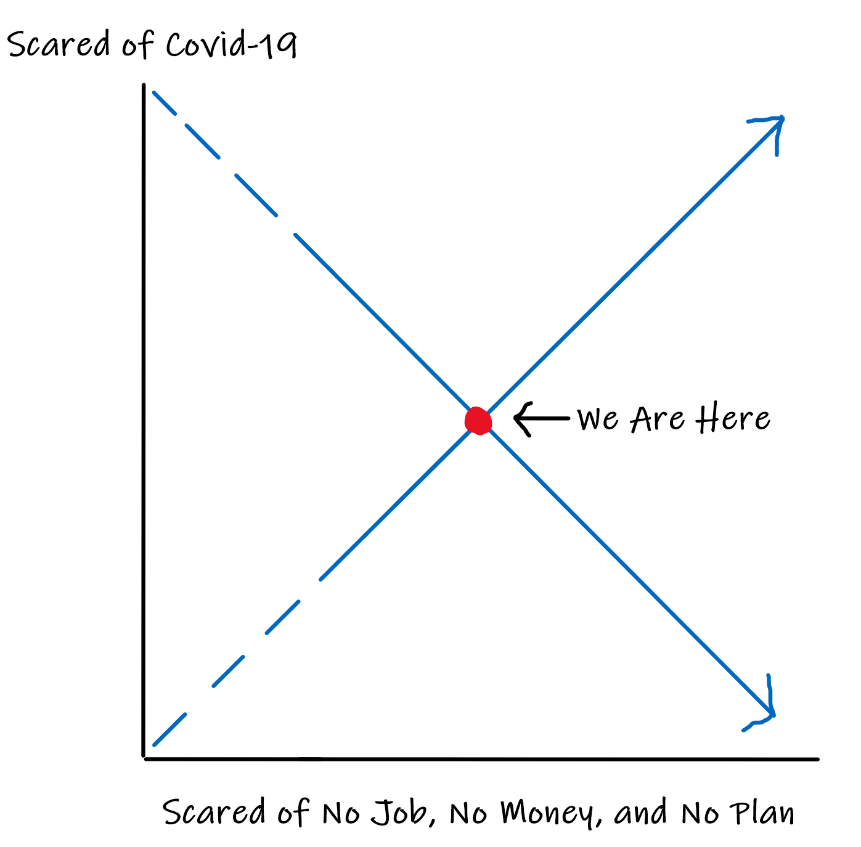 Due to COVID-19, we live in a state of government-mandated, highly encouraged “safer at home” orders. It seems that many people are viewing this as an inconvenience, rather than what it is—a recession.

In my opinion, we are now at a crossing point. People’s fear of COVID-19 is starting to decrease. In the meantime, their fears of a recession, losing their job, and having no money are starting to increase.

Imagine the economy driving 90 miles per hour down a Tennessee back-road and taking a turn too quickly. It lost control and slammed into a tree. This is the reality of our economy. Businesses do not have the ability to restart like the collision never happened. It takes time to rebuild and there will be collateral damage.

MPG now stands for “months per gallon”. The current price per barrel of oil sits at $11.78. This is the lowest price we have seen in twenty years. In normal economic times, a reduced oil price is good for consumers. Filling up the gas tank is cheaper, and one has extra money to use on other discretionary purchases. Currently, we are seeing demand for oil fall to near zero, and we have a tremendous oversupply.

According to a Dallas Federal Energy survey, the average breakeven oil price in the U.S. ranges from $48 to $54 per barrel[1]. Producers may be able to bring down the breakeven price by lowering costs, but a sustained oil price under $40 per barrel is going to be devastating for the industry.

Oil companies have been a popular investment historically because of their high dividends paid to investors. Digging a little deeper, there are some significant impacts to oil companies and investors. I expect most dividend payments to be reduced or cut out completely. With no demand and an excess in supply, the oil producers do not have the revenue to pay expenses, debt obligations, or dividends. The dividend cuts and job layoffs will be the first two dominos to fall, followed by defaults on debt obligations, and finally, bankruptcy for many oil companies. Below is a chart that shows the price of oil over the last 20 years. 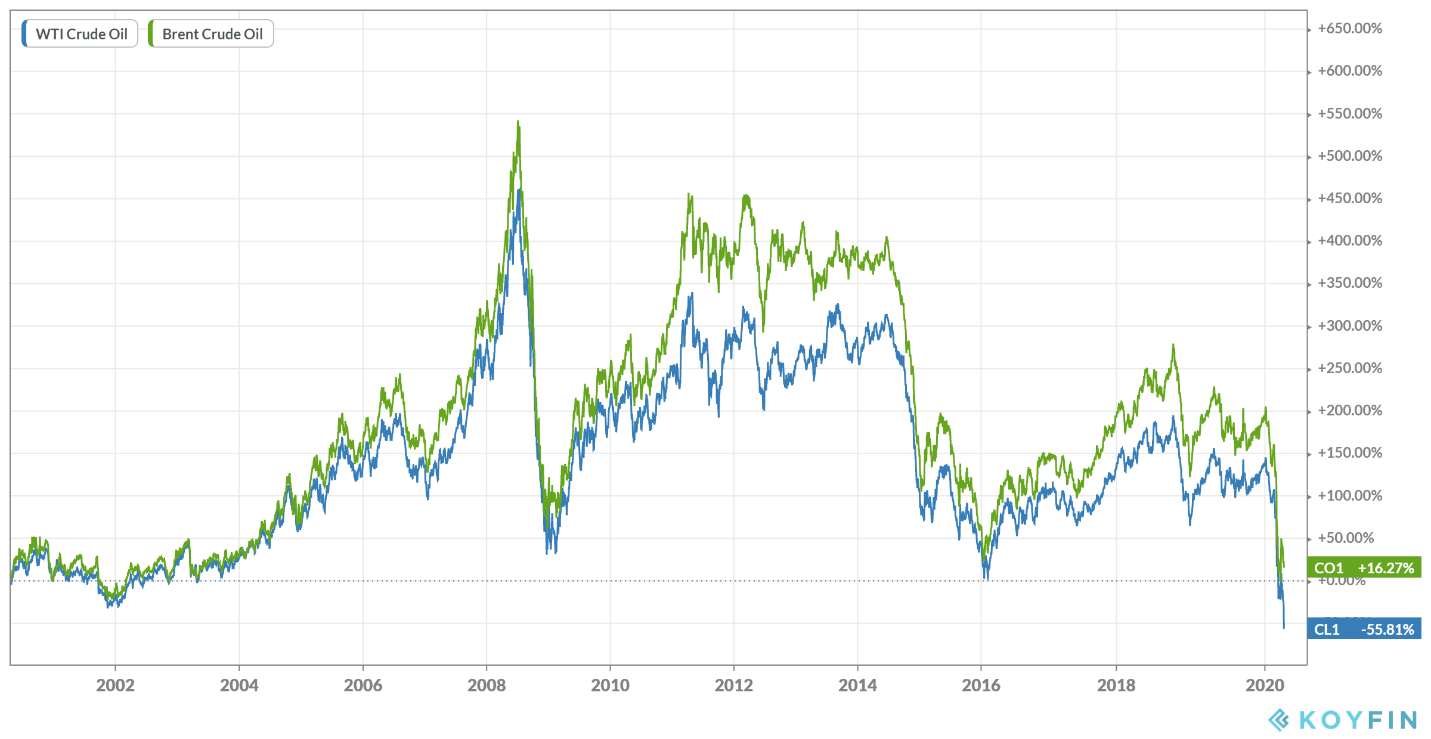 Over the last four weeks, we have seen initial jobless claims that total about 22 million people.

It took only four weeks for the U.S. economy to wipe out nearly all the job gains in the last 11 years. The coronavirus and the forced closure of business throughout the country again fueled the number of Americans applying for state unemployment benefits, which last week totaled 5.245 million, the Labor Department reported Thursday.

Combined with the three prior jobless claims reports, the number of Americans who have filed for unemployment over the previous four weeks is 22.025 million. That number is just below the 22.442 million jobs added to nonfarm payrolls since November 2009, when the U.S. economy began to add jobs back to the economy after the Great Recession.” [2]

With the news of Walt Disney and Best Buy each furloughing about 50,000 people, the expected layoffs from the energy sector, and the shutting down of many small businesses- I expect millions more to be laid off. This also means they will file for unemployment benefits. The longer the shutdown lasts, the more risk we run for future layoffs and businesses closing for good because they are not able operate. There are two reasons business cannot sell goods and services. First, we are on lockdown, which stalls demand. The second is with the vast number of layoffs, incomes have weakened, resulting in less discretionary spending.

The current “next 12-months consensus earnings estimates for the S&P 500” is $150. As of April 17th, that is a current P/E (Price to Earnings Ratio) of 19. The 25-year historical average is 16.33. As company earnings continue to be under pressure, I expect the earnings estimate to be revised lower.

It is my opinion that the earnings estimate is still about 10% too high, which would estimate $135 for the S&P 500. At current market value that would still put the P/E at 21.

The bottom line here- if consumers do not have jobs or money to spend, then businesses do not have products or services to sell.[3]

I originally thought we would retest the market lows (or close to it) as the shocks to the economy started to grasp the severity of this self-inflicted economic shutdown. I didn’t think we could get back to business-as-usual until we saw three things:

It is now my opinion that the Fed will do (per their words) any-and-everything possible to backstop asset prices. The government has passed the CARES Act, which has provided measures to help soften the economic blow of the impact of this pandemic. They are providing direct payments to individuals and families as well as increasing the federal unemployment benefit for those who have filed for unemployment. They provided loans for small businesses to make payroll, rent, and utility payments to bridge the gap until this virus passes and we can get back to work. Federal student loan payments have been suspended for six months and the interest rate has been dropped to 0% on those loans.

The printing press is fired up and running 24/7. It would not surprise me to see a pullback in the market. However, with the Fed’s unlimited balance sheet, I do not think we retest those lows.

My assumption is it will take longer for the economy to recover. Unfortunately, everything is a complete guess right now, and the market is totally disregarding the economic fallout, jobless claims, unemployment numbers, businesses closing, earnings and revenue dropping, et cetra.

The government may have good intentions with the CARES Act and likewise with the Fed on monetary policy. I think there is a fine line of support intended to prevent the collapse of our economic system. At the same time, we should let free markets work and allow buyers & sellers to determine asset prices.

Content in this material is for general information only and not intended to provide specific advice or recommendations for any individual. All performance referenced is historical and is no guarantee of future results. All indices are unmanaged and may not be invested into directly. The economic forecasts set forth in this material may not develop as predicted.